In June 2017, the Independent Anti-Slavery Commissioner travelled to Vilnius to explore how the UK can better work with Lithuania in the fight against modern slavery.

The Commissioner travelled as part of a delegation alongside His Eminence Cardinal Vincent Nichols, Archbishop of Westminster, and representatives from the Santa Marta Group, a coalition of police chiefs and Catholic bishops from across the globe.

Lithuania is a source, transit and destination country for victims of modern slavery; exploitation most commonly takes the form of forced labour and sexual exploitation, with sham marriages also an ongoing risk.

“The UK is one of the top destination countries for Lithuanian nationals, which means we have our work cut out” says the Commissioner, Kevin Hyland OBE. “This visit has been crucial – Lithuanian criminal networks operate between borders which requires close operational work and strong political relationships.” 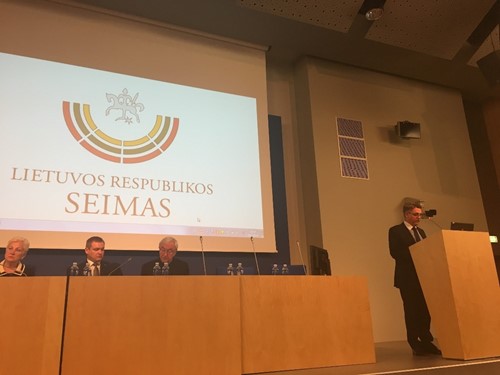 The Commissioner presenting at the Lithuanian Parliament on the subject of modern slavery.

Lithuania has been engaged with the issue of modern slavery for many years and has implemented a number of projects to protect potential victims and pursue perpetrators. While on the visit, the Commissioner presented to policy makers, charities, police, academics and other key stakeholders at a Knowledge Forum titled “Trafficking in human beings: globalization, values, social exclusion and the importance of partnership” hosted in the Lithuanian Parliament. The forum made room for open discussion on the issue; attendees were able to ask questions to a high level panel and challenge the Lithuanian government on their efforts to curb the crime of slavery. 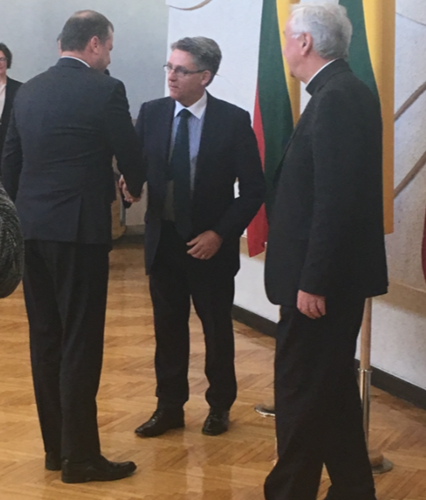 Visiting source countries is part of the Commissioner’s efforts to prevent modern slavery as “targeted international collaboration” is one of his five main priorities.

“The majority of victims identified in the UK come from other countries, meaning that our efforts to prevent the abhorrent abuse of slavery cannot occur in the UK alone. We must travel. We must explore. We must seek to understand what is pushing people to the UK and how these criminal networks are choosing to operate.”