In May 2017 the Independent Anti-Slavery Commissioner, Kevin Hyland OBE, travelled to Australia to meet with ministers, businesses, charities and faith groups to discuss the implementation, success and challenges of the UK’s Modern Slavery Act.

The visit was the result of an inquiry into establishing a Modern Slavery Act in Australia, carried out by the Joint Standing Committee on Foreign Affairs, Defence and Trade at the request of the Attorney-General in February this year.

The Committee was tasked with looking into the success of the UK’s Modern Slavery Act, with a view to introducing similar provisions in Australia. The UK has shown global leadership in responding to the crime of modern slavery, with an Act that is the first of its kind in Europe to specifically tackle slavery and trafficking, and the Commissioner is responsible for spearheading the country’s response.

“The UK Modern Slavery Act boosts victim support, enhances law enforcement powers and calls companies to account” says the Commissioner. “It has been viewed as the “benchmark to follow” and has profoundly changed the lives of many.”

With 4,300 people potentially trapped in modern slavery in Australia, and an estimated 30 million across the Asia-Pacific, the Commissioner reminds us, “It is all too easy to lose sight of the fact that, behind each of these numbers, it is a woman, or a man, or a child, being brutally abused, treated as a mere commodity, often for the financial gain of organised criminals or opportunistic exploiters.”

The inquiry focused in part on exploitation within the supply chain. The UK’s Act includes a ‘Transparency in Supply Chains’ clause; this requires every company with a turnover of more than £36 million to publish an annual ‘slavery and human trafficking’ statement, setting out what they are doing to address these issues in their supply chains and business operations. Ensuring this is indeed addressed is a priority for the Commissioner, who has worked with numerous CEOs to help identify cases of slavery and protect workers.

Following his visit to Australia, the Commissioner stated, “The Commonwealth is a tool for collaboration; this trip has shown that there are key opportunities for the UK and Australia to come together in the fight against modern slavery. We will ultimately see more victims rescued and more perpetrators punished – together we must pursue this while momentum is in full force.” 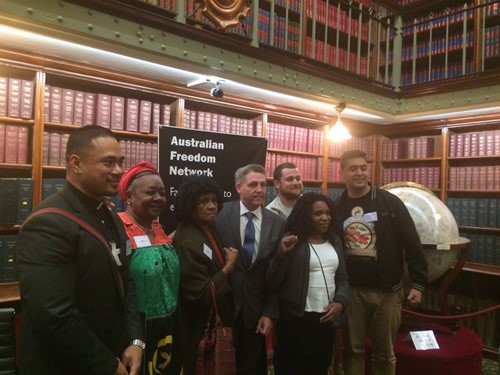