On the eve of Anti-Slavery Day 2019, Dr Richard Benjamin, Head of the International Slavery Museum in Liverpool came to meet Dame Sara and spoke to the Office of the Independent Anti-Slavery Commissioner on the museum’s diverse collections on historical and contemporary slavery, their plans for expansion and the importance of collaborative working with anti-slavery partners to enhance understanding and awareness of modern slavery and human trafficking.

The International Slavery Museum’s mission statement is for people to hear about the ‘untold stories’ of enslaved people historically and today. Could you tell us a little more about the museum’s aims and its history, and the importance of the museum as an institution and resource?

We wanted to expand the size of the museum, so we moved from the basement and closed the Transatlantic Gallery and moved up to the third floor of the Merseyside Maritime Museum.

We take the narrative a bit further and bring it up to date. Our first gallery is on Life in West Africa. We tried to put a bit of context on how diverse African culture was, because the majority of people who come to the museum have little understanding of the Transatlantic Slave Trade or indeed Africa or Africans.

The middle gallery is called Enslavement in the Middle Passage and focuses more on Britain and Liverpool’s role in the slave trade, the economics of slavery and what life would have been like once people had been forcibly taken from Africa.

But part of why I’m here today is because we wanted to tell a modern-day story as well. This isn’t easy, but we thought it was an opportunity to broaden people’s understanding of the different types of slavery. We’re an active museum and we make subjective decisions about what we want to get involved in and the work we do.

At an early stage we started working with NGOs such as Anti-Slavery International and invited them to Liverpool. We made a big strategic decision to focus on contemporary issues, and we’ve had a number of contemporary exhibitions within our final gallery, the Legacies Gallery.

Could you tell us about some of the collections and work that the museum has been doing for Anti-Slavery Day and how people can get involved with this - and with shaping the future of the museum?

There’s a real moment for us as a museum. We’ve got very big, transformative plans. As I said, there’s the third floor of the Merseyside Maritime Museum. We also own a building called the Dr Martin Luther King Jr building and it’s pretty much the most iconic building as you enter the Albert Dock in Liverpool.

National Museums Liverpool have had that building since 2008 and we purchased it with the express aim of making that the front door of the museum.

Whilst at the moment we’re very limited in the narrative we tell, space-wise, this will be four times the size and will allow us to tell lots of different stories and narratives. Lots of the work we’re doing in the field of contemporary and modern slavery will allow us not only to develop the public’s understanding and awareness of various campaigns, but you’re able to host more events, such as on Anti-Slavery Day. This Saturday, the A21 Walk starts and finishes at the Dr Martin Luther King Jr building.

Curators and members of the education team at the National Museums Liverpool have built up strong relationships with various NGOs, like Stop the Traffik in Liverpool, City Hearts and other organisations that will hold workshops, lectures and meetings within the museum’s space. But we’re looking at taking that a step further.

The capital project plans we’re discussing at the moment is a £20 million project. That will allow us to increase the size of the museum, increase the amount of exhibitions, but also increase the space that those who work in the field of modern slavery can use to increase the public’s awareness. It’s a win-win – more space for collections, for exhibitions and for our partners to use.

The Independent Anti-Slavery Commissioner will be working with the International Slavery Museum as it expands its space and collections, providing a central hub for raising awareness and hosting activities on modern slavery in Liverpool.

You can learn more about the museum’s work, including teaching resources on modern slavery, here. 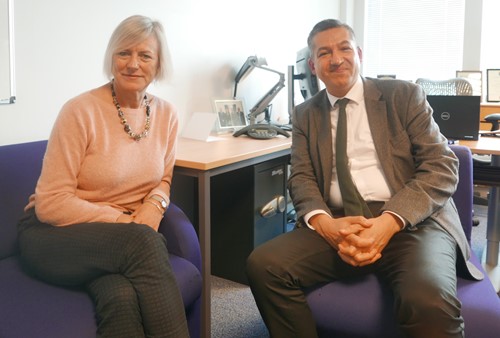